Where Do I Start?

Looking back I see that my last proper blog post was over 6 months ago now!
Where has that time gone?
So much has happened, but not all in a good way I'm sad to say, I've sat at my PC many times intending to blog, but never got further than a title or the first words of a sentence.
So as not to bore you with the longest post ever about what's been happening, I'm going to break it down into several parts.
The pain from my Arthritis was getting very bad and I was hardly knitting or doing any form of crafting, looking back now I think I was being chased by that big Black Dog of Depression, I couldn't shake the beast off, no matter how hard I tried, so I just allowed myself to succumb.

In June I was scheduled to have my left knee replaced, I was feeling really nervous, having had the right one done last year I knew what was coming. We decided to have a weekend away at East Wittering before the surgery as I'd be laid up for a while afterwards.
First order of the day was to take Boris to the beach as on previous visits he was still on restricted exercise from his surgery, so had to stay on the lead. As you can see he certainly threw himself into having a great time on the beach.

Love, love, love swimming in the sea, much more fun than paddling in muddy puddles :)
Posted by What Boris Did Next on Saturday, 20 June 2015

When we got back to the camper van disaster struck, somehow I overbalanced and fell smashing myself into the rear of the van, I have no memory of what happened, just that the pain in my arm was excruciating!

I was unable to get up because of my dodgy knee not being able to support me and every time I tried to move I screamed out in agony, I could feel the bones moving around inside my arm. I'm pretty sure my language must have been appalling at this point, I've never felt pain this bad EVER, I felt like I was going to pass out at any moment.

Himself had to call an ambulance, as I needed one of those pillow things they pump up under my backside to help me stand up. The X-Rays revealed I fractured my Humerus bone in six places near the top. 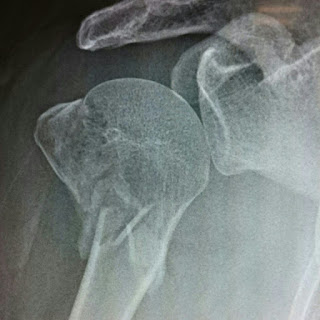 I couldn't wear a cast because of the location of fractures, so had to wear a cuff sling, with my hand up near my chin for six weeks, there was also talk about the very real possibility I would need surgery to repair it.
Week 1
The photo doesn't do the bruise justice as it was almost black! 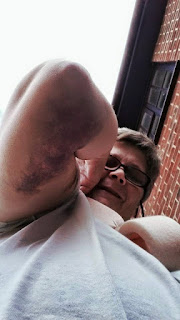 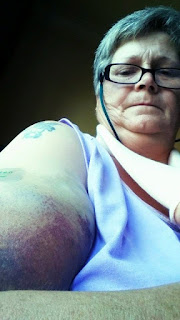 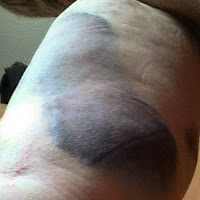 ﻿
﻿
Week 3
The elbow and inside of my arm are still black and blue as the bruise travels down to the lowest point, again the photo doesn't show the true black and blue of it. 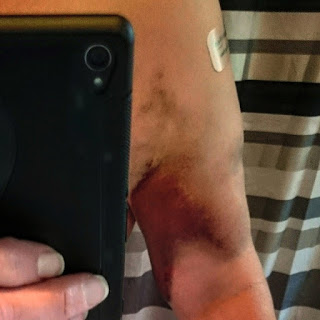 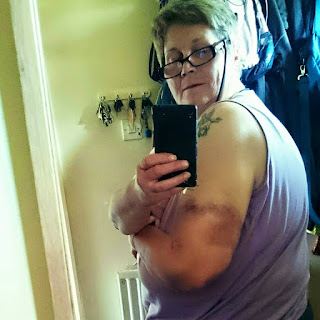 To make matters even worse my knee replacement surgery had to be cancelled, I have no idea when that will be rescheduled for again.

At my six week check up the X-Rays were disappointing as so very little healing had happened, I'm still having to wear the sling 12 weeks on, I'll find out this week if any more healing has happened. Its still very, very painful but I do have some movement in it now which I didn't before.

That's just about it for today, I'd forgotten how much concentration it takes for me to write a post and I'm feeling really tired at this point.
I'll update you again in the next day or two.