The Joy of Being Me

There really is nothing better than a good gallop around the woods on a chilly morning, to keep this old pup young at heart. 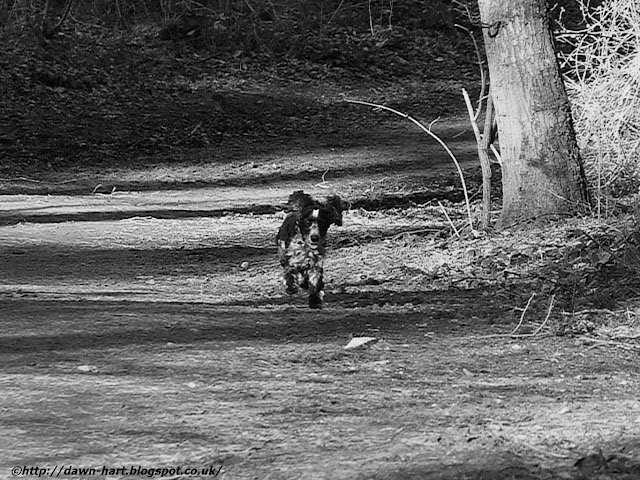 I'm coming through mummy, so you'd best get outta my way cos I can't stop BOL 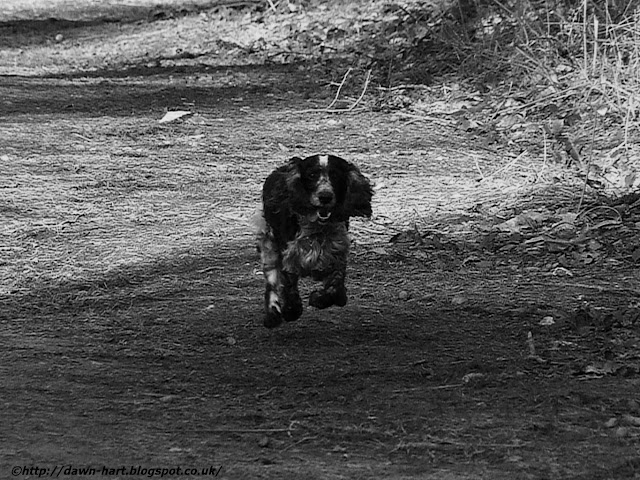 Motion ~ Photo of The Week

I know I've been a bit naughty adding two pictures this week;
But I didn't think you can have one without the other? 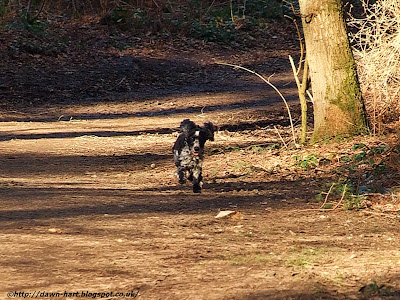 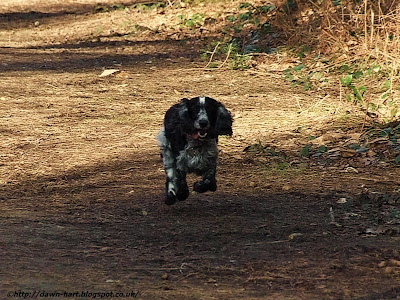 Email ThisBlogThis!Share to TwitterShare to FacebookShare to Pinterest
Labels: Motion, Photo of the Week, SocialPix

I loves to sniff and check the local pee-mails. 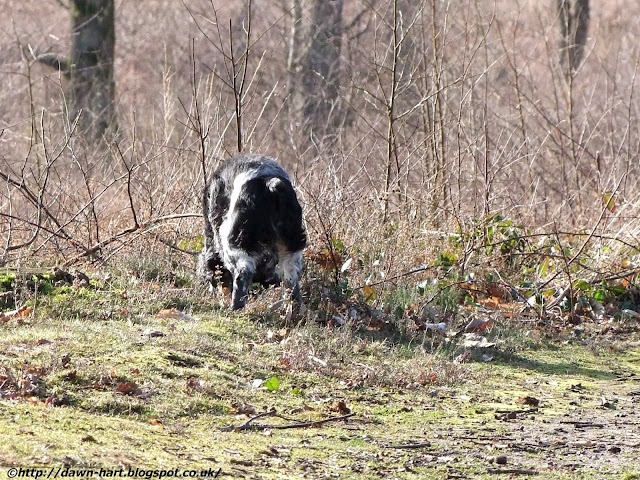 My fluffy ears really help, they acts like a funnel trapping the scents. 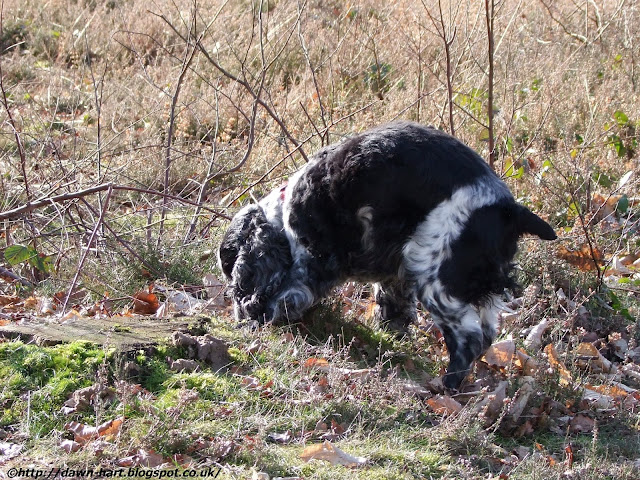 I've found the scent of a fox! You know what that means :o) 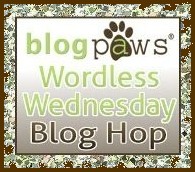 Meet my beloved Cassie.
She is my special lady. 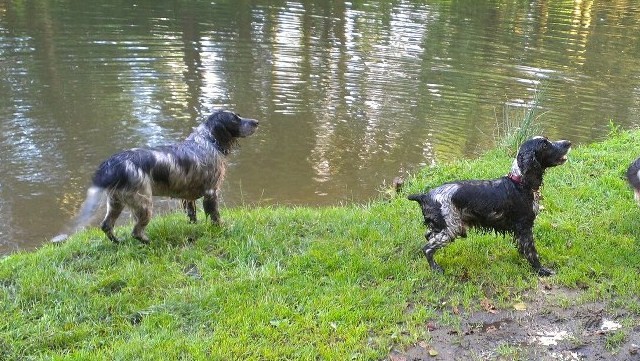 She is the sweetest thing, sometimes she gives me a good telling off if I gets a bit too lively with her and sometimes she ignores me completely, which is why I loves her so much. 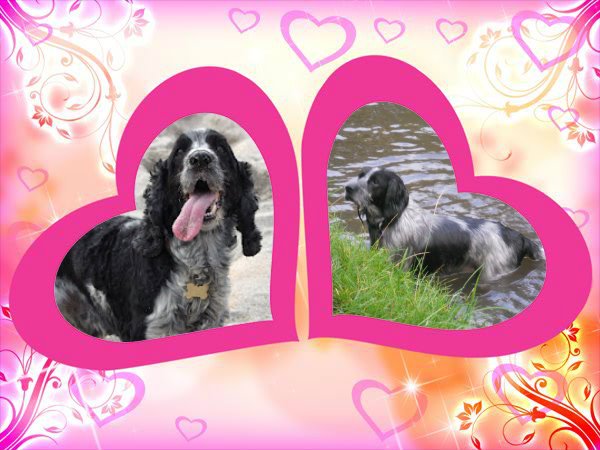 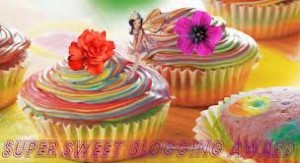 OMP  I was so pleased **puffs out chest in pride and does a happy dance** you can find the post here.
Thank you so much Coralee and Finn it means a lot.

I writes my blog because I enjoy doing it, the fact hoomans, pups and kitties read it is a bonus, but to be given an award for it, is just the most pawesome thing ever!

There are Rules attached to this award.
As you know I'm not that big on following The Rules, but just this once I will make it an exception, cos some times a pup has to do the right thing.

Rule One:- I have to answer the following five questions.

1) Cookies or Cake?
I say both but it depends what I can steal BOL

2) Vanilla or Chocolate?
Definitely Chocolate, although I don't get chance to steal it often, as mummy is very careful with it, cos it's not at all good for us pups.

3) What is you favorite sweet treat?
Rice Pudding **drools at the thought**

4) When do you crave sweet things the most?
All the time and whenever mummy is eating them.

5) If you had a sweet nickname, what would it be?
Sweetie Pie.

Rule 2:- I have to pass this award on to a Bakers Dozen of sweet blogs.

Gosh I love so many this is going to be a very hard rule to obey, but here goes:-

1) My GBGV Life
What a beautiful **swoons** clever pup Emma is, she knows everything about what hoomans get up too and makes me smile with her pawsome pictures.

2) Clowies Corner
Clowie always makes me BOL at the antics of her and her hoomans, she is a very pretty Pyrenees too**swoons**

3) Oz the Terrier
Like me Oz is a big dog trapped in a small body, he is very talented and writes wonderful poetry.

4) The Mad Dog Lady of Shackleford
The wonderful adventures of a mad lady with her Boxer Dog and Hens in her local area.

5) You Did What With Your Weiner
Amazing adventures of small dogs, you don't have to be big to have fun.

6) Golden Woofs
Sugar is a beautiful Golden Girl **swoons** who loves to spread her Golden Woofs wherever she goes.

7) The Hailey Chronicles
Life of a Rescue dog in her forever home with her new brother.

8) Christmas Pie Crafts
A pawsome lady who re-homes kitties, makes some amazing cards and a place where I have Guest Posted.

9) Roxy the Traveling Dog
Like me Roxy gets to travel all over the place having lots of adventures.

10) Dogs N Paws
A cool place to find out about all things dog.

11) Bringing up Bella
How a shy little girl learns to overcome her fears in her forever home, she is very pretty too **swoons**

12) Hey It's Jet Here
A busy pup just looking after his mum and having fun.

13) Murdoch She Wrote
Exploits of a reformed character and his hoomum who loves to run.

Good golly gosh that has worn my fluffy paws out, but so worth the effort I think. It was a very hard choice to narrow my favorite blogs down I hope you enjoy them too.

Rule 3:- Say Thank you
Thank you so much Coralee and Finn it you have made my year **does a happy dance** and I feel deeply touched to receive this award.

On Thursday I went to the Groomers to have my wayward locks tamed, I came back covered in the stench of shampoo and was forced to pose for this picture. 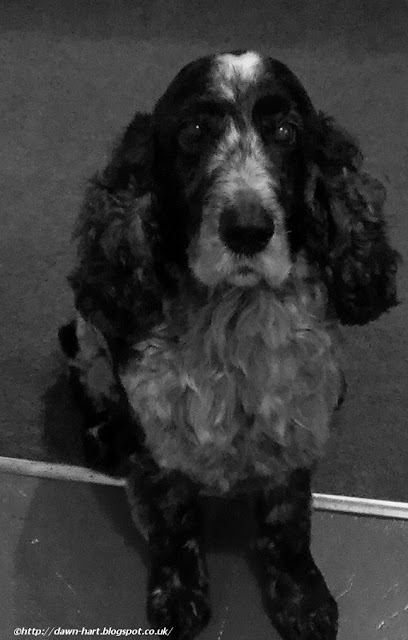 How long do you think it took me to get rid of the stench and smell normal again?

A Trip Round Broadwater Lake

Daddy's car had to go to the Car Vet today, so whilst it was being operated on I took my hoomans  for a chilly stroll around Broadwater Lake.

It looks like the most pawsome swimming place, but I had to stay on my lead the whole time **sob** Dogs can't swim there cos people have big poles and string to try and catch the fishes. Are they daft or what? **muffled giggles behind paws** 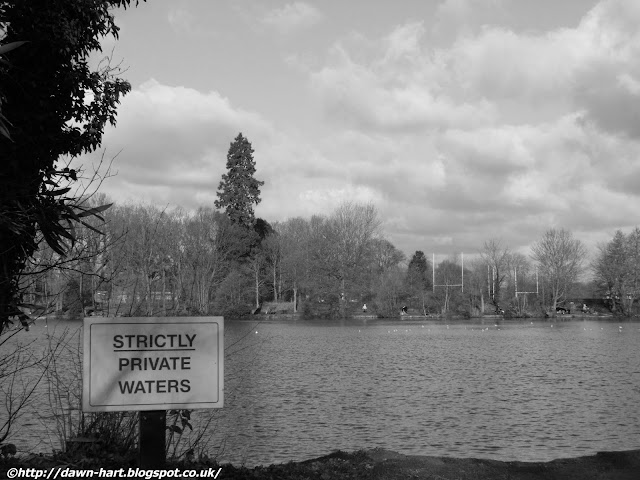 As I'm gazing wistfully into the distance I suddenly spy
DUCKS!!! 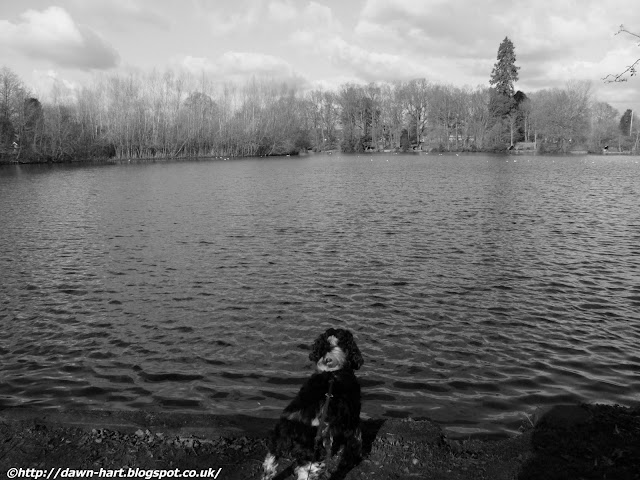 OMP I could hardly contain my excitement **whines excitedly at the memory** I've been trained not to chase them, but it has been ages since I last saw some and I forgot myself. It's a good job I was on the lead, I'm sure I would have humiliated myself and my hoomans by jumping in the water and swimming off after them.

There is a set route all around the lake which we followed. Which meant I was getting nearer and nearer to those pesky ducks, who just love to tease a poor pup stuck on a lead by swimming about all the time. 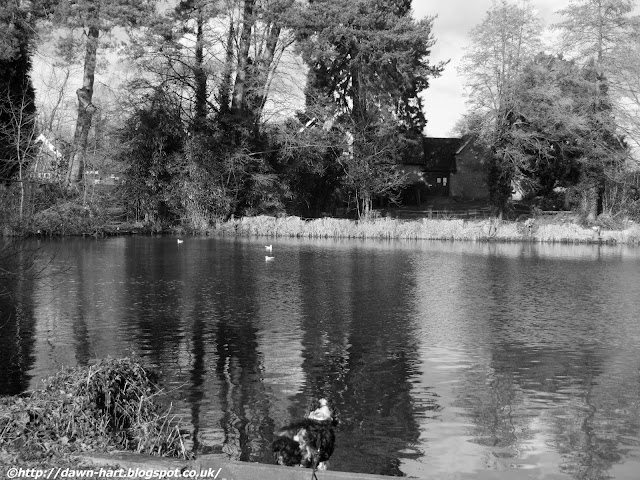 Going through the wooded area I really had to strain to see them though the undergrowth. How I wishes my legs were a bit longer at times like these, so I can see over the bushes! 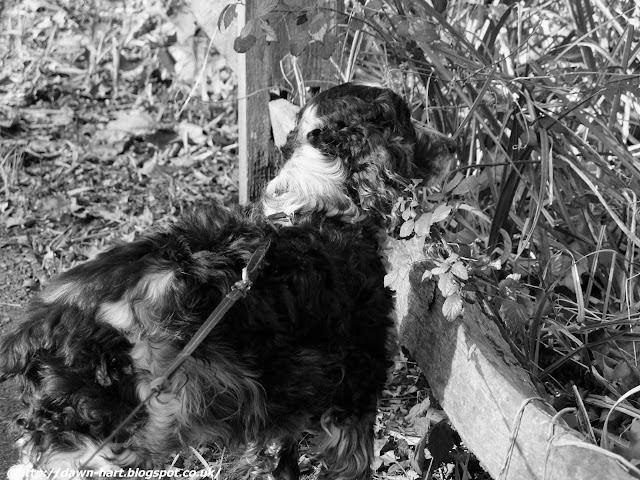 When we finally reached the area where they all were, I then had to endure 10 minutes of re-training. You know the sort of thing, just sitting and looking at them without getting over excited. So boring but us pups must humour the hoomans sometimes. 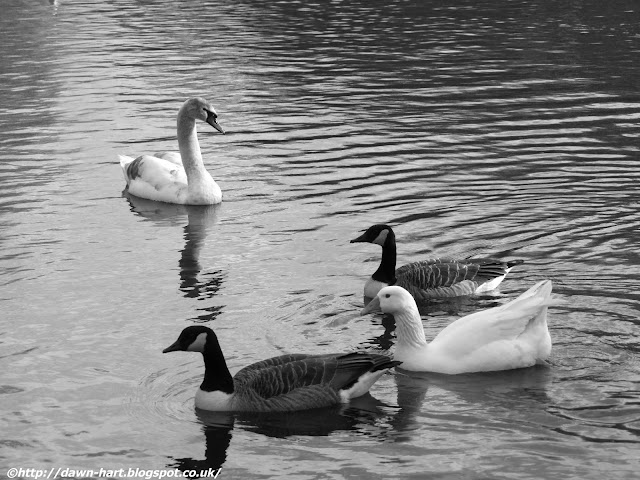 Those 10 minutes were the toughest of my life, I felt quite pooped out when we left that area, so took some time out for a little rest on one of the many conveniently placed benches. Which of course mummy took full advantage of as a photo opportunity **resigned sigh** 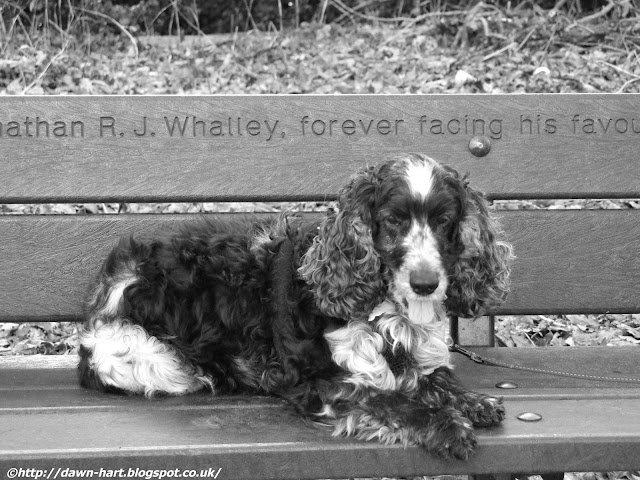 Normally I don't mind to much but today I was having a really "Bad Hair Day" mummy says I look cute, but I'm not so sure.. 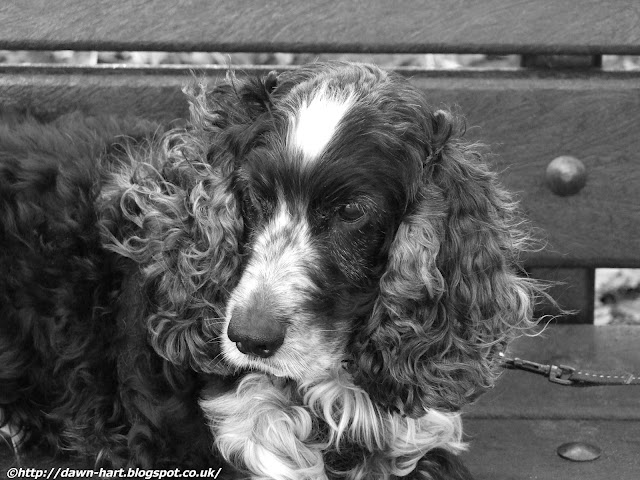