Sadly I had to have two teeth extracted yesterday, I've never known so much pain the day after a tooth extraction before, my jaw is in agony and I can barely open my mouth! I swear this NHS dentist had no idea how to extract teeth, it took him nearly 30 minutes to get them both out and it felt like he was physically dragging my jaw all over the place!

How I miss not being able to afford private dental care anymore. Now there's no more crowns, no more implants and no more quick and relatively painless tooth extractions,  in fact there are no more options at all except fill it or pull itI love the NHS and everything it stands for, I have so much to be grateful to them for, but their dentistry does leave a lot to be desired!

The school dentist ruined my teeth as a child by doing giant fillings, in my 20's the surrounding teeth started breaking away from these giant fillings, which in turn started me on a 12 year journey of excruciatingly painful dental problems and dental abscesses

One day I was in so much agony with a badly infected abcess, I couldn't get hold of my dentist as he didn't work on mondays, so in desperation I went to the local private practice and my life was changed

Although there were no appointments available that day, they squeezed me in as they could see it was an emergency because my jaw was huge with infection, they couldn't do any treatment that day because of the abcess but I was given a perscription for antibiotics, I immediately started to feel a lot better because somebody was at last taking me seriously and cared about the pain and problems I was experiencing with my teeth

I went back a week later and had my very first root canal filling done, I was converted to private dentistry and stayed, several years were then spent getting my teeth right with root canal fillings and getting crowns put on all my back teeth. It  wasn't a cheap process and I didn't have dental insurance, the cost of it was worked out on how much previous work I'd had done on my teeth and was far too extortionate for me, it was cheaper for me to pay as I went

Fast forward to 2013 when I was medically retired from the job I loved and soon discovered I could no longer afford to stay with my private dental practice anymore, so the hunt for an NHS dentist was on

I found the practice I'm with now and continued with my regular check ups and all was well until one day I broke my bridge somehow, it had become unattached on one side and was moving around so off to the dentist I went to get it sorted, unbeknown to me at the time this was the start of a whole different dental adventure with the NHS

The tooth under one side of the bridge had decayed and broken, nothing could be done to repair it as there was no tooth left, the root needed removing and the bridge was cut and smoothed out to allow the remaining tooth it was attached too to stay in place and I was left with a gap of two teeth on my lower jaw

Several years later the tooth under what was left of the bridge started to cause me problems with some pain, by this time I was on some pretty heavy duty painkillers for my arthritis and had no idea that I infact had another infected abscess under my tooth until xrays were taken 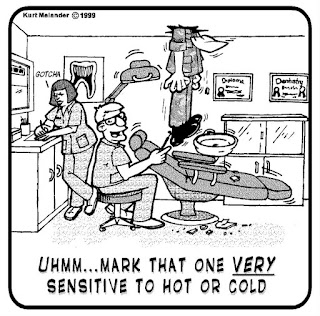 So it was a course of antibiotics for a week then the recommendation that the tooth be removed as there was decay that had got in under the bridge/crown which was traveling down the root, so the tooth was extracted and I was left with no teeth at the back of my right side jaw

It didnt affect me so I felt no need to get a denture for it, although I did start to feel somewhat aggrieved that after the expense of saving my teeth years previously that these were now gone

Last year I did something really stupid and pulled one of my crowns off whilst eating a toffee, I went to the dentist expecting them to just stick it back on again

My usual dentist was no longer there anymore so I had to see somebody new, he informed me its wasn't as simple as sticking the crown back on again, so he did xrays and said the tooth need to come out as again decay had got under the crown and damaged the root

The extraction for this particular tooth was extremely painful and took a long time, afterwards I was told it was because it was so close to the other teeth either side, which sounded reasonable to me at the time

Once Lockdown started in the UK in March of this year my dentist sent out an email that they would be closed to everybody except for genuine emergencies. Around about April/May time I lost a crown on my lower left jaw whilst eating my dinner, it wasn't overly painful but I rang the dentist about it and was told I'd need to wait until lockdown was over as I wasn't in serious pain

Once Lockdown was eventually lifted I managed to finally get an appointment for last week, by now the tooth in front of the one minus the crown was causing me some serious pain. Xrays were taken and yet again decay was found under the crown and an abcess was forming, there was also signs of a chronic infection in the tooth and root that the crown had fallen off of several months previously, the only answer was antibiotics then extraction

So yesterday I went to the dentist and endured the most excruciatingly uncomfortable extraction to date, which has left me in agony this morning. The extraction site is fine and as expected but it's my jaw and the whole left side of my face that's in agony from all the manipulation that was done to it, plus the uncrowned tooth in front of the two extracted ones is now mobile and quite sore