Three years ago on the 16th May 2018 this wee munchkin came home with us and we called him Eko
Eko came to us with plans to train him as my assistance dog and a successor to Boris, but he started naturally alerting to his dad's sugar levels at around 5 months old and was reliably alerting by the time he was a year old
Eko's journey to becoming a fully trained medical alert dog has been a slow one and is still ongoing, although over lockdown we've had a real breakthrough with his impulse control and excitability around people
So much so that he's now happily accompanying his dad into London to his workplace once a week 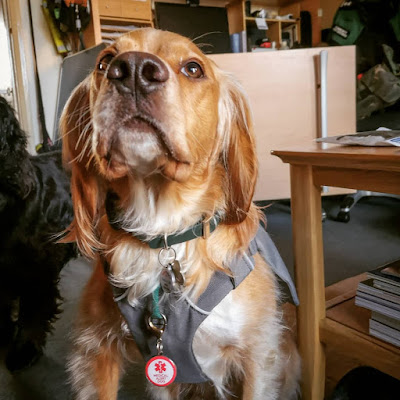 We've had a few ups and downs along the road, at times I thought he'd never make it to be an assistance dog in training, he used to bounce absolutely everywhere on his hind legs because he was so keen to check everything out that peaked his interest
Eko just took a little longer to mature than most and that's fine, you should only ever train potential assistance dogs at their own pace
Rushing them or starting them too young can cause them to burn out, in the past 6 months or so everything has started to fall into place
We'd not been idle in Eko's early years though, at 16 weeks old he accompanied Boris on one of his modeling jobs to save leaving him at home on his own all day
Kerry the photographer asked if she could take some photos of Eko, I agreed and warned her that he was a handful as I'd not taught him any poses and he'd not long ago learnt to sit stay briefly, so everything with him training wise was still very hit and miss because of his age
I needn't have worried, Kerry was experienced at working with dogs and knew exactly how to get the very best out of him, which led to some amazing photos of Eko acting totally naturally that her client was very happy with
Since that day Eko has excelled as a dog model and we've had the pleasure of collaborating with several large brands as well as some smaller ones too
There's so much to tell and catch up with about Eko's early life story and journey, we'll be telling you all about it in the Jackanory Stories series that runs in the background of this blog
To be continued....
Dawn
xxx
This post is linked to
My Sunday Photo
My GBGV Life
Random-osity
Claire Justine
Follow
Posted by Dawn Hart