Using up those Odd and Ends when crafting

We all have them, those little odds and ends we make then put too one side, as they didn't quite work in the project you'd originally made them for. Mine all live in a big Kilner Jar on my window sill, every day they sit there looking at me willing to be used.
This week I tipped out the jar and started sifting through the bits to see what cards I could come up with. I tasked myself not to make any NEW cards until I'd used as least some of these items up.
This Thank You card was a simple one, I'd made the sentiment a couple of weeks ago, but decided it was too large for the card it was intended for. The flowers were a something I was trying out I saw on Pinterest, where you colour the stamps with watercolour crayons then dampen with a water spray and stamp. I dismissed it as too scruffy so into the jar it went so I could use the other side of the card for something else. The sentiment and stamp landed side by side and looked great together, so I dug out some pretty backing paper and bakers twine the card was done 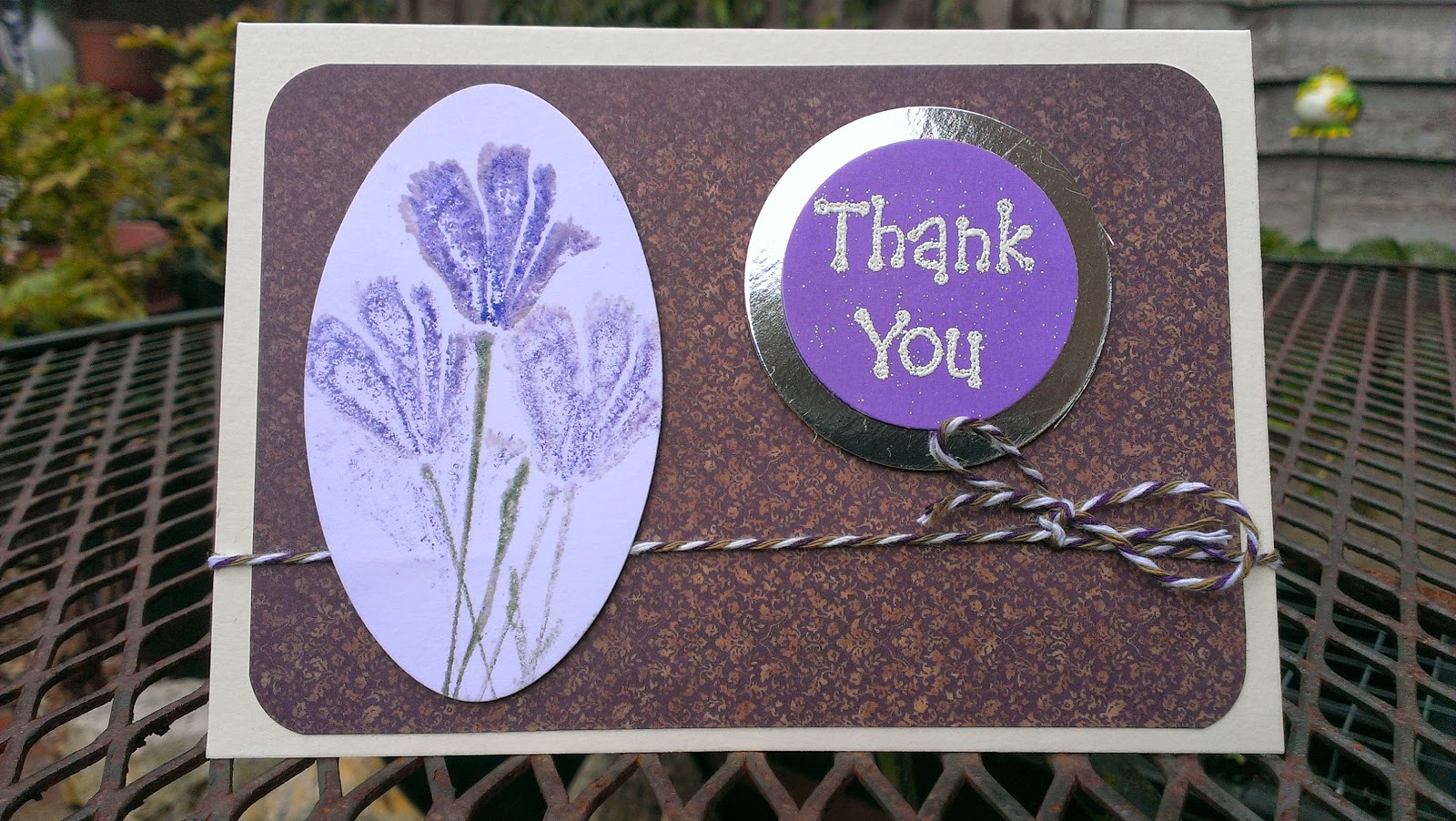 The Happy Anniversary card was slightly different, I've been trying to learn to draw without much success, but found I really enjoyed painting my stamped images with watercolours, this little mouse was my second attempt but I just couldn't decide what to do with him. I then found the Happy Anniversary stamp with the orange backing paper. So using my punches I punched out the mouse, some matching backing paper, added some bakers twine and gems onto a card front that was already made up with a backing paper and was very pleased with the result 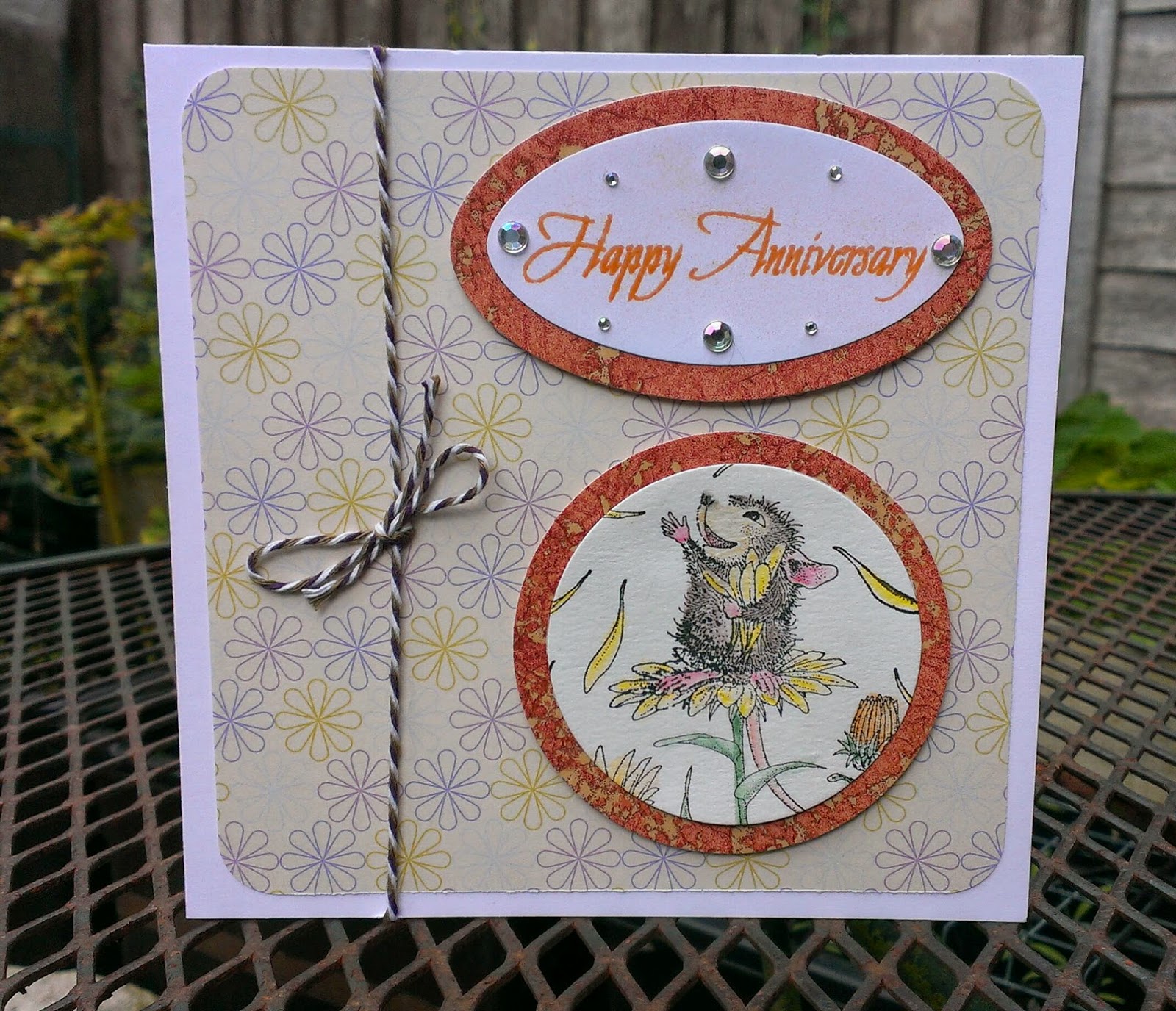 The next two cards were some Spaniels I'd made up some time ago, you may recognise them as being similar to the ones that used to be at the top of my other blog. I always make them up several at a time, it's so much easier if I need one to make up a card quickly, not having to wait for the glue to dry, plus every one of them is ever so slightly different even if you think they look the same, look closely and you'll see what I mean 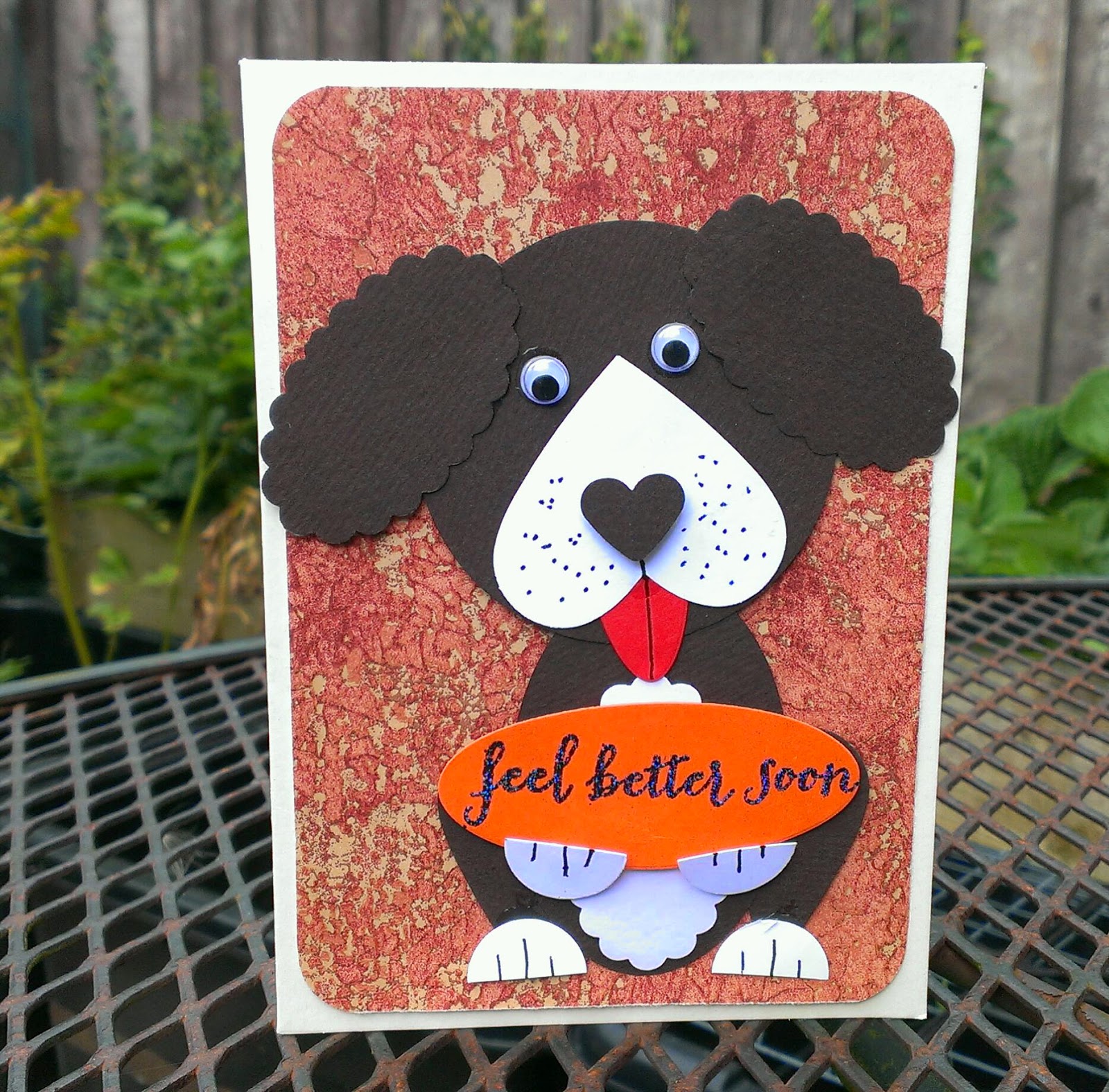 I added some sentiments that were in the jar, cut a circle in half to make their forepaws look like they were holding it and stuck them onto two card fronts that were already made up 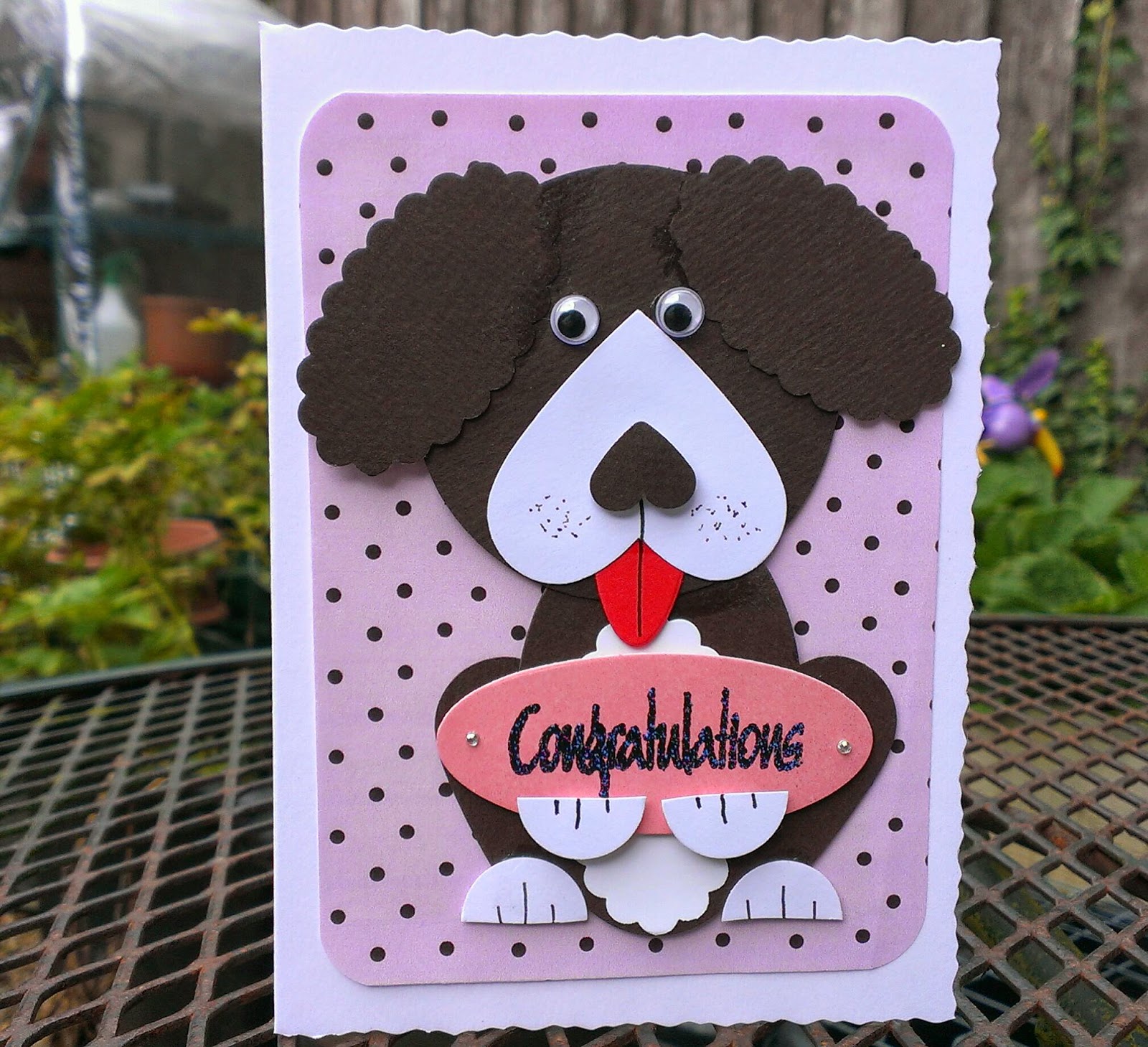 I love making the spaniels and was really getting into using up the odds and ends, so decided to give a box card a go. They look very complicated, but are actually fairly simple to make, I watched several videos on YouTube before I got down to actually making it 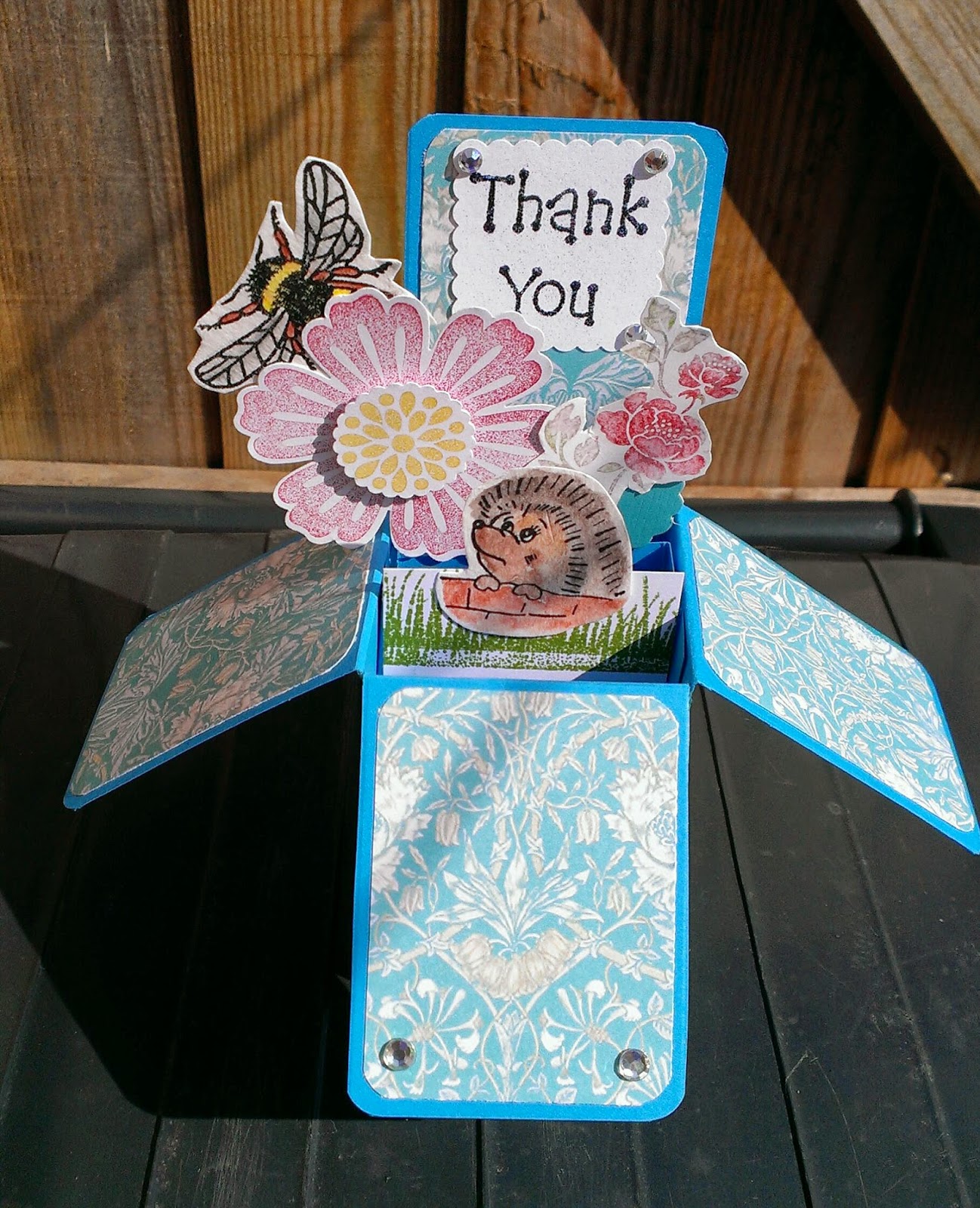