So pleased to be invited back for another Guest Blogger at Christmas Pie Crafts, thank you so much Jill, what a great honour for this small pup.
Hope you enjoy it too. 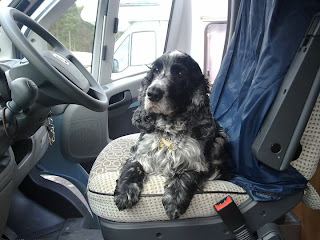 Good golly gosh this has been a hard one to decide what to write abouts, I have so many stories and daft adventures, but my puppy mind is a total blank, because at the time of writing this, daddy is most unwell at the people vets...

So I thinks I will tell you abouts the worst night of my little life EVER!

Things have been very hectic at home, as daddy had to go and visit the people vets for a simple operation, all went well and he came home, I was so pleased to see him, but had to be very gentle as he was a bit fragile.

That evening we curled up on the bed together and I watched over him whilst he had a sleep, I'm also known as "Nurse Badger" as I spend a lot of time looking after my mummy with her hurty joints.

He wasn't sleeping very well and was groaning a lot, so I went downstairs to see if mummy was about to come and check up on him, somehow my doggy senses told me there was something not quite right going on. Mummy had nodded off downstairs, so I jumped onto the sofa and started walking all over her and licking her face, it's the best way to wake her up, but she really, really hates it BOL. I then dashed upstairs knowing she would follow because *whispers behind paw* she always needs a wee when she wakes up, but shhh I never told you that...

As I reached the top of the stairs daddy started to call out to mummy in a horrid scary voice I've never heard before, I jumped onto the bed to check on him, but he pushed me off, I was shocked! That had never happened before! Then mummy came in and she was talking in a strange voice too. I decided to retreat to my own bed as I was feeling very scared, my people were acting very strange and didn't want to know me!

So I lay there, all curled up sobbing inside as I was so frightened, watching what was going on...

Mummy made daddy take some medicine, and then made a phone call, which was odd as she never ever phones people on that phone, and it was very late too. She was still talking in an odd voice, and daddy was still making lots of noise, and I was starting to shake with fear by this time!

Mummy then came towards me, I stood up wanting a cuddle but she shut the door on me, I was trapped in my bedroom! That door has never been shut with me on the inside in my life, it was dark, I was scared and started to howl, thinking I must have been shut in by accident.

I barked and swore as loudly as I could and scratching at the door to be let out, it seemed like I was doing it for hours before mummy came to let me out.

Then I got a massive shock daddy was gone and so were the strangers, I charged around he house looking for him but to no avail, suddenly I realised they had all gone out the front door. I went to mummy, who picked me up, then she started to cry into my fluffy coat and tried to calm me down.

Daddy had been taken back to the people vets in a big yellow thing called an am-ber-lance, not sure what one of them is though. 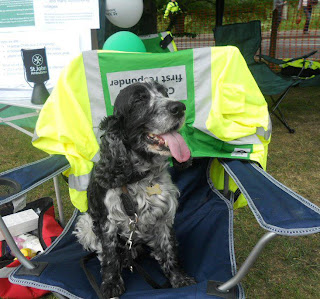 Mummy then said I must stay at home on my own to look after the house, as she had to go and see daddy at the people vets and might be gone a long time. I didn't want to stay on my own, but I was as brave as I could be and finally went to sleep.

When mummy came back, she said we wouldn't be seeing daddy for a few days as he had developed a complication and had to live at the people vets. As I hadn't been allowed to say good bye and got very stressed, I went on Hunger Strike for a few days until mummy finally bribed me with some rice pudding yum yum yum. 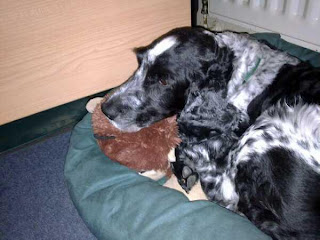 Please remember when you are in a stressful situation, it affects us pets too. More so because we don't know what is happening and really don't understand what is going on..

Hopefully by the time you read this daddy will be at home and well on his way to recovery.

Hope you enjoyed this snapshot of my life?

My adventures can be followed in three places:-

1)  My facebook group http://www.facebook.com/groups/273294092706/ which has been going for several years now, and has 900 members. You are welcome to join us and share your own Daft Adventures, or just read other peoples.

2)  My Blog http://badger-boos-daft-adventures.blogspot.co.uk/ Which I started in March of this year, and seems to be very popular too.