I was gently coaxed out from under the long chair by my new hoomum and sat on her lap, until Meegan had calmed down. I was used to playing rough games with my siblings but they were my size, Meegan was a GIANT! 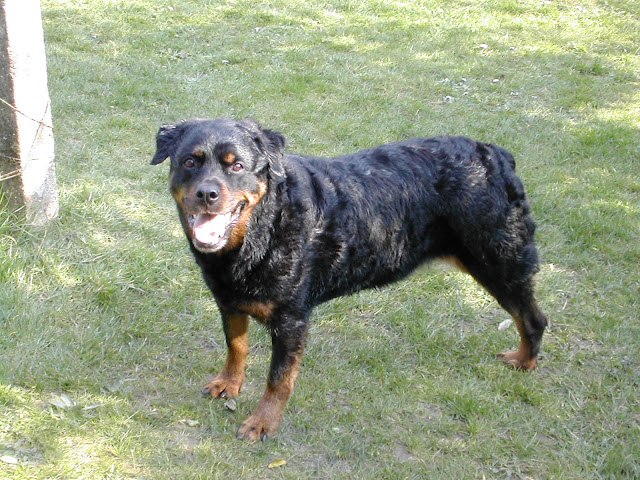 Eventually she realised that to get me to play she had to be gentle, and I then recieved another wash with her giant tongue, but I was getting used to being all tangled up in it by this time.

We then went on a tour of the house and she showed me her bed which was massive, so much bigger than the one I had slept in with my other family, and she let me get into it with her, even offered me her bone but it was far to heavy for me to lift up! 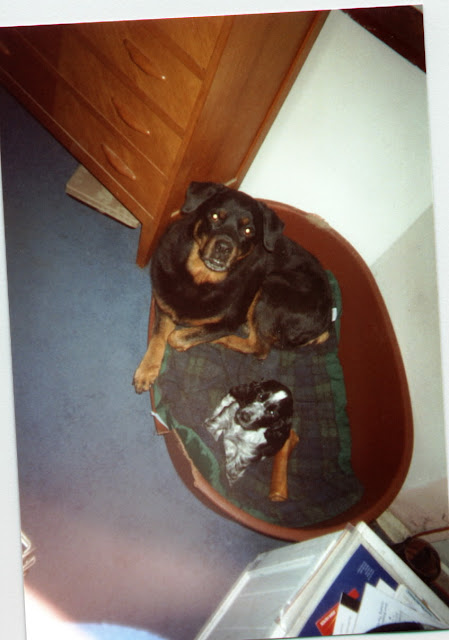 Meegan  was a very kind mummy, even if her immense size was a bit intimidating when I first met her. She taught me so much about life and the strange things out in the big wide world, and we became firm friends.

People used to laugh, cos we looked so odd walking down the road with our hoomans, **her being so big with only 3 legs and me being so small with 4**  but she taught me to hold my head high and ignore them.

I digress:- Firstly I needed a name, my hoomum believes that doggies should choose their own names. I was puzzled by this, as I couldn't talk let alone make a decision. Meegan explained to me how easy it was:- I would be called lots of different names over the next couple of days, and when I heard the name I liked, I was to run up to hoomum for a cuddle and that would be my name forever.

It didn't take too long to find my name, but I certainly didn't like Sweep, Frank, Frodo or Barney! All nice names I grant you, but not for me, then she called Badger and that was it, I galloped up to hoomum for my cuddle. Over the years my name has changed slightly and now I'm known as Badger Boo by my pawsome friends.

I was then given my own bed in a crate that used to be Meegans puppy crate *she must have been a huge puppy it was maasive*, right next to her bed. I was very brave I never cryed on my first night even though I missed my family terribly, cos my new mummy was right there.

Over the next few days me and Meegan got to know each other, and she used to let me sleep in her bed during the day, but only on the condition I didn't try to suckle milk, as she said she wasn't a Milk Mummy she was my Teacher Mummy.

She was always so generous and let me have so much space in her bed so as not to squash me. I was living the good life and having fun, with no idea of the surprises that life had in store for me!!!
To be continued:-
Posted by Dawn Hart