Just had a very wet weekend away with the hoomans, we were late getting away as the house on wheels had something called a puncture and the wheel was flat. I was going to help daddy fix it, but he seemed to have everything under control, with a noisy box that blew the tyre up and mended the puncture.

He can be pretty clever for a hooman my daddy, he always sorts any problems out to do with my transport whilst me and mummy supervise what he is up too. 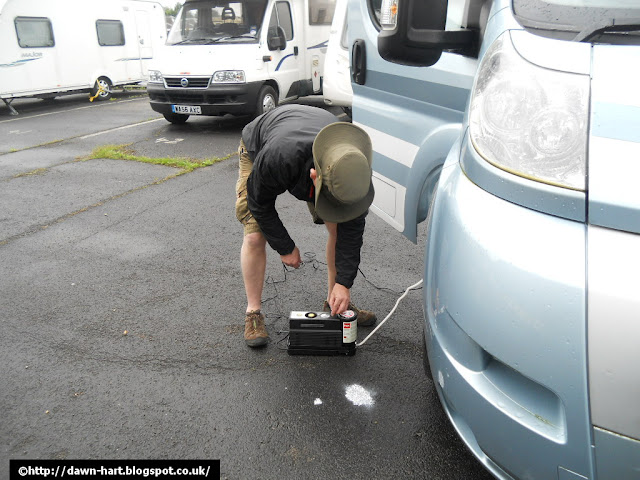 Although this time, I decided I'd be better off inside and out of the rain, so I was ready for the off when things were finally sorted out. 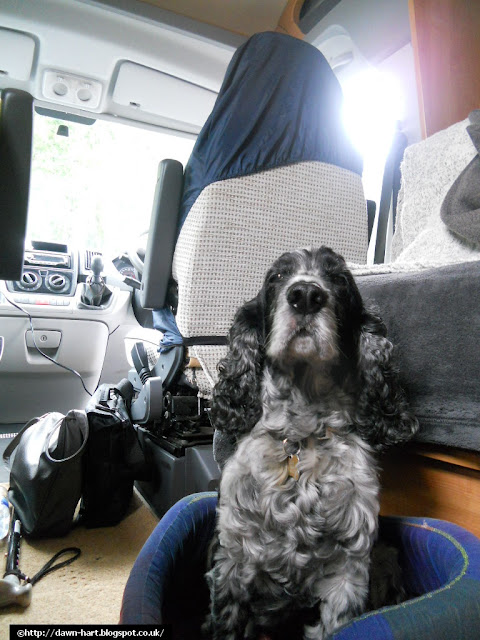 Eventually everything was sorted and it was time to leave, we were off to my favorite beach at East Wittering. It's so nice and quite there, and the beach is HUGE when the tide goes out.

When we got there we didn't go out straight away as mummy said it was raining too hard, although what did it matter? I was going swimming and would get wet anyway, I think they were being just a little bit wimpy about it. So all I could do for a couple of hours was sit and gaze out of the window, wishing the rain would stop. 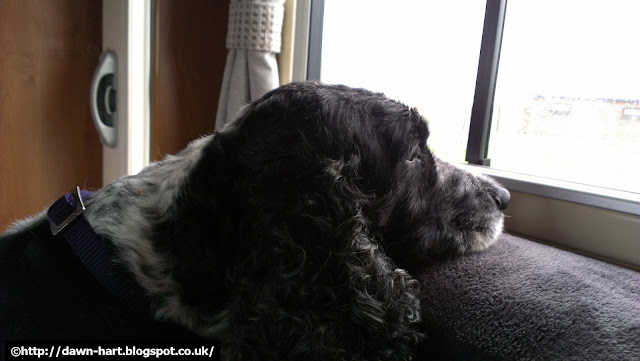 After a while I got bored with that, so decided to start climbing all over daddy to try and get him to play. We had a little game, but the house on wheels is a bit small for running about in, so I had to be content with just annoying him. 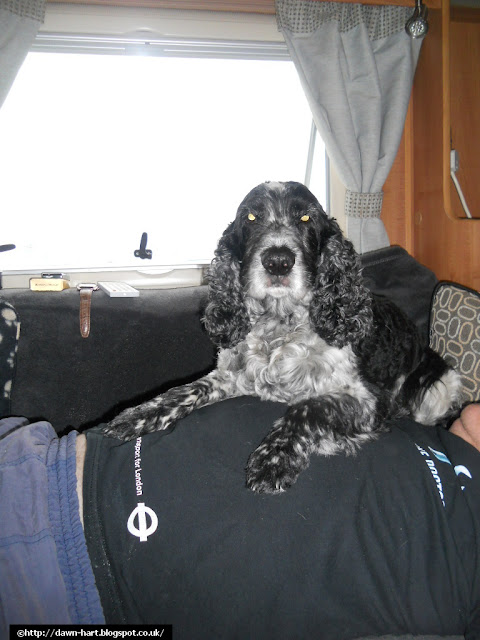 Suddenly I noticed it had stopped raining, I jumped up and peered out the window. Yep it had stopped, come on people no excuses, now lets get down the beach. 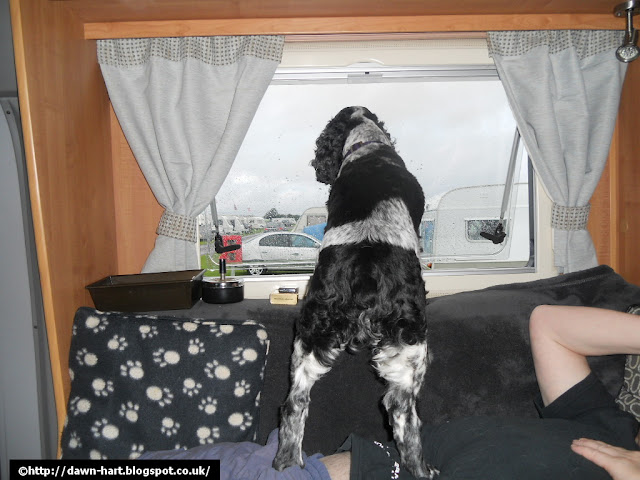 But we didn't go down the beach, we walked to the dog walking field where I met two cheeky young terrier types who just wouldn't leave me alone to check the pee-mails in peace. I think they may have thought I was quite a handsome chap **blushes**

A bit further on I met a rather cute Orange Roan Cocker Spaniel and her body guard, we all had a good sniff of each other and then proceeded our separate ways after a short game of chase.

Then all of a sudden the heavens opened and it started to pour down with rain, we all so very soaking wet, which meant I was confined to my towel bag when we got back to the house on wheels, until I had dried off a fair bit. 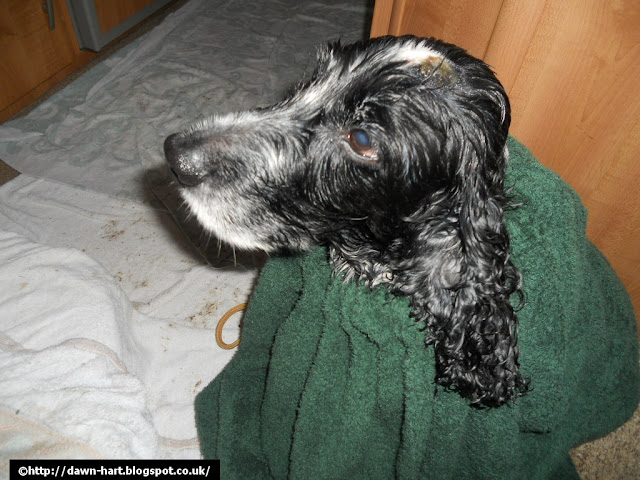 I don't mind my towel bag as it keeps me nice and warm and I dry off fairly quickly, although last time I was in it at home, sompawdy knocked on the door and I forgot I was in my bag, so I shot off to sort them out, only to nose plant the floor as my legs stayed inside the bag. Luckily mummy didn't have her camera when that happened, oh the humiliation of it!

When I'm dry enough to come out of my towel bag it takes me ages to get the cushion in my travel bed comfy.

Later that night I didn't get too much sleep as the rain was pelting down on the roof making a heck of a racket, so it was lucky I'd had a lot of sleep the day before when we couldn't go out, or I'd have been to tired for the beach!

Finally in the morning we went to the beach and we were the only ones there, the sun was shining and it was bright but not that warm when you only have a thin coat. 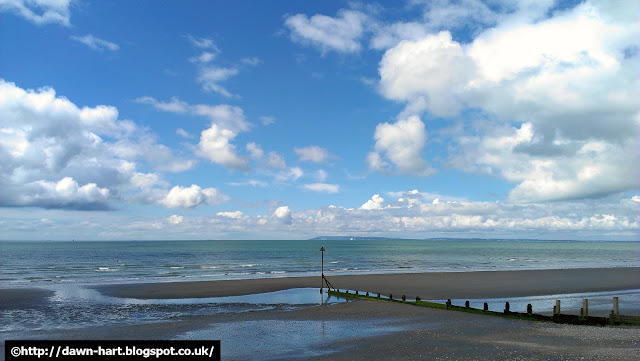 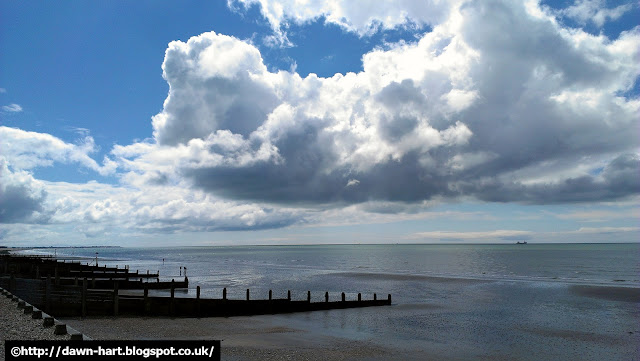 Had a pawsome game of fetch, but all too soon it was time to head home again and back into the real world or so we thought.

The house on wheels got stuck in the mud! 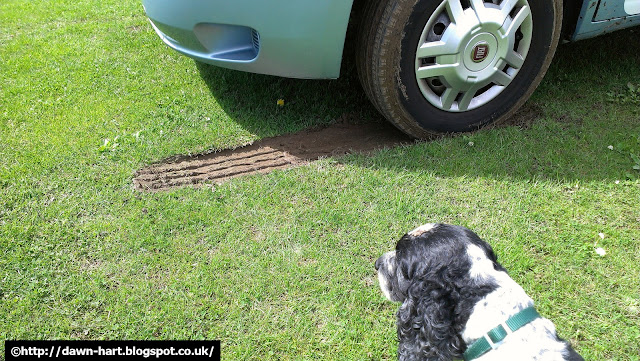 We had to wait ages for the people who own the site to pull us out, as it is very bad etiquette to churn up your pitch and can result in you not being allowed back on site.

That would be most awful if I couldn't go back to my favorite beach, luckily we didn't get moaned at and made it safely home.

What a pawsome adventure we had this weekend, it's been a long time since we last went out in the house on wheels...